"With all of the stress of a new responsibility in our lives and also balancing work and parenthood, it is a real treat to be able to safely walk around in our neighborhood with our child."

David O'Neil, developer of Breckenridge's Wellington Neighborhood, understands full well that, ever since the award-winning project was first presented to the town in 1997, he has had to carry a full pocket of asterisks every time he refers to it as "new urban" in nature and structure. Sure, Wellington has, from the get-go, boasted many of the concepts put forth by the Congress for New Urbanism. There are common areas and front yards and porches and picket fences and all the garages are right where all tasteful vehicle enclosures ought to be: out back, near the alley, where they can't be seen as easily. 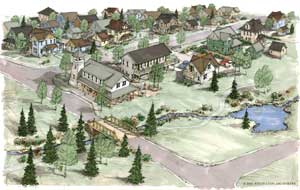 So far, so good. But Wellington has been missing one of the basic components of the New Urbanism liturgy: Commercial space integrally mixed right in with the rest of the development.

It's not that O'Neil has been playing some sort of conceptual/marketing shell game. On-site commercial space has been part of the long-range plan since Wellington was first conceived. It's just been a case of making certain the cart does not inch its way up ahead of the horse.

Now, with 60 occupied homes to his credit and 150 or so people already calling Wellington home, O'Neil believes it's time to start seriously planning the commercial phase of the project. And, like the residential component, the commercial part of Wellington will set conception standards aplenty.

What O'Neil envisions is something called "Live/work." To give you some idea of how important he considers the synthesis of residential and commercial space, his fact sheet does not even divide the two words. He spells it "Livework" - a situation where at least some of Wellington's residents can literally stroll on over to the commercial component of the development and punch in at the ol' timeclock.

The idea is as old as the concept of New Urbanism itself. Historically, American neighborhoods contained just about everything residents could need: grocery stores, bakeries, coffee shops, bars etc.--all within a 10-minute walk from home. Many people lived above, or at least within walking distance, of their place of employ. And, even those people who commuted to work did not need to commute to buy the basics of life. It has only been in the past half-century that our living structure has devolved to the point that people have to drive 25 miles to get a beer or a bag of taters.

"The idea of having a commercial aspect to Wellington has been there the whole time," O'Neil says. "The Breckenridge Planning Department knows that we intend to bring that part of the project before them."

Wellington Neighborhood, located about three miles up Wellington Road (turn at the 7-Eleven just north of Breckenridge and keep driving until you see a whole slew of faux Victorian houses on your right), consists of 85 acres. The project is already approved for another 60 housing units. There are three lots specifically dedicated to O'Neil's Livework "experiment" (his word).

"The first building we have designed will be 2,400 square feet, which is not large," O'Neil says. "The main floor will have 1,400 square feet, which will be used for a bakery and coffee house, post office boxes, ski storage and bus stop. The second floor will be used for office space. I'm already talking to a long-time local about running the bakery and coffee house, and several residents of Wellington who work at home have expressed interest in the second-floor offices. I think there will be 8 125-square-foot offices.

"There will be two other buildings, one the same size as the first, and the last one will probably be about a third the size," O'Neil continues. "These buildings will not jut be for residents of Wellington, though I expect many will be interested in this aspect of the project. The goal is to enhance the traditional neighborhood character of the Wellington Neighborhood. The architecture will fit with the rest of the neighborhood, and the business mix will give people the opportunity to make connections with their neighbors."

O'Neil says his fantasy is to have people returning to Wellington via the Summit Stage, stopping to pick up their mail, then going into the java hut for an espresso and to mingle with neighbors, before walking home.

"We're definitely looking to round out the neighborhood experience," he says.

The fiscal structure of the commercial aspect of Wellington is, well, not traditional. Matter of fact, it's not even fully sussed out yet.

"We are hoping that people interested in the commercial space might have an ownership interest in the building," O'Neil says. "Our lease rates will be influenced by what users bring to the neighborhood. This is still a work-in-progress. We'll see what kind of interest there is in the project."

No matter how the fiscal component of the project eventually pans out, one thing is clear: O'Neil has a palpable mix vision of Wellington's commercial space.

"I'd love to see things like an antique store, a small wine store, a gardening store, offices for architects, dentists, healing arts, an art gallery, some cottage industry, like a snowshoe or kite manufacturer, or maybe even a newspaper office," he says. "Whatever goes in there, we want it to enhance the experience of living here."

Once O'Neil gets a better feel for what kinds of businesses might actually occupy his commercial space, he will go before the Breckenridge Planning Department.

"They know we're coming," he says. "I don't foresee any problems. I'd really like to break ground by the end of the summer, with first occupancy taking place as early as late fall."

The commercial space is not the only new concept being integrated into Wellington's plans. According to O'Neil, there will also be some sort of community building.

"It could end up being a fire station or a church," he says.

For more information on Wellington Neighborhood, which is featured in the current issue of Metropolitan Home Magazine, go to poplarhouse.com.